Göbekli Tepe and the Legend of the Shahmaran

Göbekli Tepe, the ancient Neolithic site in eastern Turkey, features many animals among its motifs.  One of the most prominent of the creatures depicted there is the snake.  It is interesting therefore that the snake features across Anatolia in the folklore of Turks, Kurds, Yezidis and Iranians in a couple of prominent incarnations.  One incarnation is as a symbol of fertility, but another incarnation is as a symbol of immortality and this particular symbology is important in the Epic of Gilgamesh, in which the hero is given the secret of immortality but it is stolen from him while he sleeps, by a snake.  The immortality of the snake is demonstrated by the shedding of their skin.  The snake is a ubiquitous component of proverbs, legends and folklore across Anatolia, especially in the south eastern region.  But nowhere does it figure in ancient art the way we see it at Göbekli Tepe.  When you visit Göbekli Tepe and you see the profusion of snakes depicted there, ponder the story of Shahmaran and her human lover. 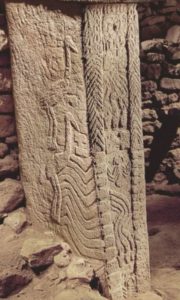 There was a young man whose name was Tahmasp. He was tall and handsome. He was a son of a poor family and he worked as a wood cutter. One day, he and his friends were working around the forest, collecting wood, when they found a well which has full of honey. They decided to take the honey. Tahmasp climbed down the well to recover the honey, but when the honey was all gone, his friends left him in the well and went away. When he realised they weren’t coming back he lost all hope until he saw a hole at the bottom of the well.  Using his knife he made the hole big enough to squeeze through and he found a large cavernous space. Exhausted from his efforts, he fell asleep.

When he woke up, he saw thousands of snakes around him. The snakes were looking at him. When they noticed he was moving, they started to approach him. He thought, he would be killed by them and he felt so helpless that he closed his eyes and began to pray to God, but nothing happened. So he gathered up his courage and opened his eyes. Before him he saw a beautiful young woman who was half human and half snake. He was so surprised he said nothing but this exotic creature said: “Don’t be afraid. We won’t hurt you. I am Shahmaran and I am the Queen of the snakes. You are our guest. Now, you are with us you must feel safe and you must rest. We will talk tomorrow.” and she went away. Tahmasp thought he was dreaming but he closed his eyes and fell asleep again. 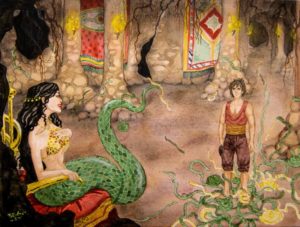 In the morning, Tahmasp woke up and found himself in a large hall and nearby he saw Shahmaran reclining at a table where a sumptuous breakfast had been laid out. Warily, he joined her at the table, completely captivated by her beauty. He couldn’t take his eyes off Shahmaran. They had breakfast together and Shahmaran told him stories about the history of mankind. Tahmasp was captivated by the stories and entranced by Shahmaran’s kindness and care for his comfort.  Before long they had fallen in love with each other.

In spite of his happiness Tahmasp still felt a sense of emptiness because he missed his family. Shahmaran didn’t want to let him go but because she loved him so, she allowed him to return to the world above but she warned him that he must not tell anybody about the subterranean kingdom of the Shahmaran and the Land of Snakes. She also warned him that because he had been with her for so long, he had taken on some of the characteristics of the Land of Snakes.  She told him not to bathe with other people, because on contact with water his skin would take on the appearance of a snake’s skin and mankind would know his secret.

Many years later the King of the surface world in which Tahmasp lived, fell ill,and his doctors told him that the only cure for his illness was to eat the flesh of Shahmaran.  They then told him the story that there were people in the land who knew about the underworld kingdom of the snakes and that the only way to find out who they were was to pour water upon them because water would turn their skin into scales like a snake.  In this manner they would be able to find someone who knew the way into Shahmaran’s kingdom.  So the king ordered everyone to go to the public baths and under the eyes of his soldiers, to immerse themselves.  Tahmasp tried to hide but was found by the soldiers who took him to the town baths and threw him in.  As the Shahmaran had told him, his skin took on the appearance of a snake and the soldiers dragged him from the water, bound him and took him to the king.

Under torture, he gave up his secret and the soldiers went to the well and entering into the Kingdom of the Snakes, captured Shahmaran and took her to the palace of the king.

Tahmasp felt full of shame and remorse when she saw Shahmaran. Shahmaran then turned to the soldiers and the king and said “As I am about to die, I will give you my secret. Whoever eats my tail will attain wisdom beyond measure and long life but whoever eats my head will die.”  Upon which, the Captain of the King’s Guard killed Shahmaran and cut her into three pieces.  The Captain of the Guard, wanting to gain wisdom for himself, ate a piece of her tail, while Tahmasp distraught at the death of Shahmaran, consumed part of her head wanting to die. But nothing happened to him.  The Captain collapsed and died as did the king.  The truth was that the wisdom of Shahmaran filled her head and now was part of Tahmasp.  However, Tahmasp simply couldn’t bear the sorrow of losing Shahmaran, so he left his home and wandered about the country from land to land and from mountain to mountain and became known far and wide as a wise man.  But they say, the snakes know how Shahmaran was killed and because of this, snakes became the mortal enemy of man. 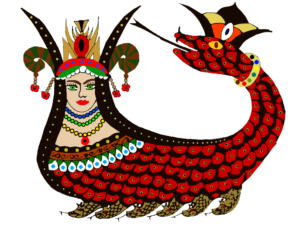 Typical picture of the Shahmaran to be seen in shops and houses across south eastern Turkey.