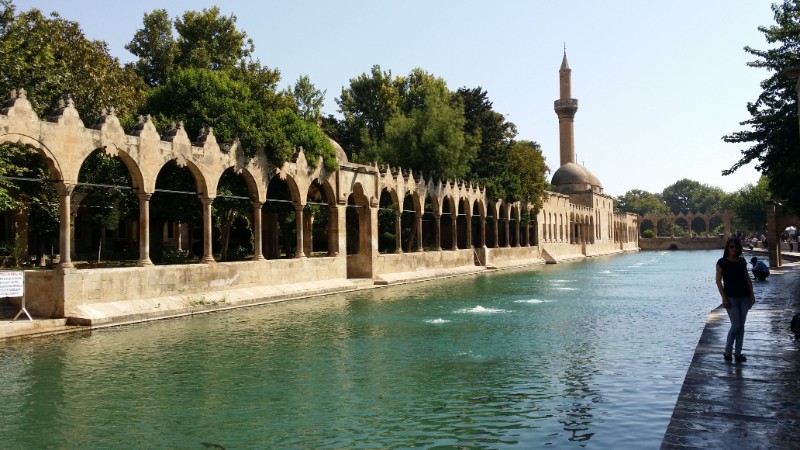 The Urfa Man statue is the oldest full-size sculpture of a human being yet discovered. Dating to about 9,000 BC, the statue is an iconic figure for Şanlıurfa and is a prominent feature of the city’s superb Archaeological Museum.

The statue was recovered from a building site in the Yeni Mahalle Höyüğü district which is located within the ancient town centre of Şanlıurfa, just north of the Balıklıgöl complex. Previous archaeological work in the ancient part of the city is complicated because of the extended period of habitation in this very ancient city. This part of Urfa is located on a hill overlooking a dry river course and has an urban environment for well over 2,000 years and has been been the subject of a number of more recent urban upgrade projects which have produced some fascinating archaeology, including Urfa Man, a T-shaped Stele and habitation levels with homes and many discarded flint tools, which are always a feature of these pre-pottery, pre- agricultural Neolithic sites and which clearly establish the technological level of the culture inhabiting the area at this time.

From the last, and previous, phases of urban upgrade and archaeological excavations, it is possible now to establish that 13 cultural levels are present beneath the streets of this part of modern Urfa, all of which are understood to be from the Pre-Pottery Neolithic period. Prior to studies performed at the revealed section of Şanlıurfa – Yeni Mahalle Höyüğü in 1997, “Urfa Man,” the near life-size sculpture of a man was recovered in 1993 during landscaping work done in the Balıklıgöl quarter.  The statue was acquired by Şanlıurfa Governorate shortly after its discovery. This sculpture is of a man, 1.90 metres in height holding his genitals with both hands, with a chevron pattern located around his neck. There are no feet but the statue was designed to fit into a pedestal in a socket fasion, which was not discovered. The statue was unearthed on its back in four pieces. The chevron pattern is also present on the “T” shaped pillars, which are well-known from the other Neolithic settlements and sites in the region. The eyes of the sculpture held chips of obsidian (not locally obtainable); the face has a well defined nose but did not have a mouth. Its head is turned slightly to the right.

The sculpture shares very similar properties with other free-standing sculptures retrieved from Nevali Çori, Göbekli Tepe and Karahan Tepe sites, which are dated to Pre-Pottery Neolithic Period. The sculpture, with others, is currently on display at Gaziantep Museum. The sculpture appears to fit in to the general tradition defined by the cultural context on characterised by “T” shaped pillars discovered at Göbekli Tepe and the settlements at Nevali Çori , Karahan Tepe , Hamzan Tepe , Sefer Tepe and Taşlı Tepe.

Urfa Man clearly demonstrates the ability of Neolithic sculptors to reproduce reasonably naturalistic forms separate from the abstract anthropomorphic T shaped stelae found elsewhere in the region. Unfortunately, little or no find context was recorded for the statue making its original function hard to determine. However, fragments of sculpted heads and other statuary have been recovered from Göbekli Tepe and the settlement at Nevali Çori.  These are in the museum in Urfa. A small T Stele was also recovered at Yeni Mahalle during this initial building work and excavation although all its context was lost (see photo)..

Technological evidence for the builders of the settlement at Yeni Mahalle come in the form of the structures they built and in the abundant and ubiquitous flint tool remnants found across the site.

When the small artefacts retrieved from the salvage excavation conducted at the discovered section were examined the technological and typological characteristics are dominated by what is referred to as the Big Arrowheads Industry (BAI). The arrowheads exhibit similarities with the arrowheads retrieved from Byblos, Aswad, Cheikh Hassan and Mureybet settlements. Almost all arrowheads are made on blades extracted from bipolar cores. In particular, the Yeni Mahalle Paleolithic tool industry appears to be contemporaneous with the Mureybet IVa and IVb periods. Based on these similarities, it has been concluded that the arrow-heads at the settlement are identical with the arrowheads observed at the Early Pre-Pottery Neolithic B Period. It’s worth pointing out that the Mureybet settlement is some 200 kms distant and while in northern Syria, it is clearly a part of a wider cultural range that stretches even further south, down into modern day southern Israel. Byblos flints are identified by a site in Lebanon.

The remnants of two round buildings were revealed at the section where the salvage excavation was performed in Yeni Mahalle, both with terrazzo floors. Also, additional terrazzo floor surfaces not belonging to any buildings were also revealed. The round building architecture present at the Yeni Mahalle section are domestic structures, which is an architectural feature presently not encountered in the Urfa region except for Göbekli Tepe (Level III) and Hamzan Tepe. While the structures at Göbekli Tepe are ritualistic and not domestic in nature, the 20 or so round structures at Hamzan Tepe are domestic. From C14 data and contextural architectural features established at Göbekli Tepe and Hamzan Tepe, it is possible to establish a date of approximately 8,600 to 8,800 BC and placing the Yeni Mahalle settlement firmly in the PPNB period.

It is worth making a brief comment about the location of the Yeni Mahalle settlement in terms of the local topography. It is located up a slope near to, but not on a river course now identified as the old Karakoyun Creek. This creek, even now, is subject to flash flooding. This was a problem in the Roman and Byzantine periods, as evidenced by the Roman flood management systems in place which include a dam constructed in the reign of Justinian. This river plain now holds the Şanlıurfa Archaeological Museum and the Haleplibahce Mosaic Museum buildings. The Neolithic builders clearly built their settlement near enough to water, but out of harm’s way.

In reference to the map above, the Archaeological Museum is located along the old Karakoyun Creek (now a managed water feature) with a new shopping mall just below the Justinian Dam. The Balıklıgöl area runs along the bottom of the map horizontally with the old covered bazaar just where the old course of the Karakoyun joins the current course. The aerial photo below will give you some clarity.