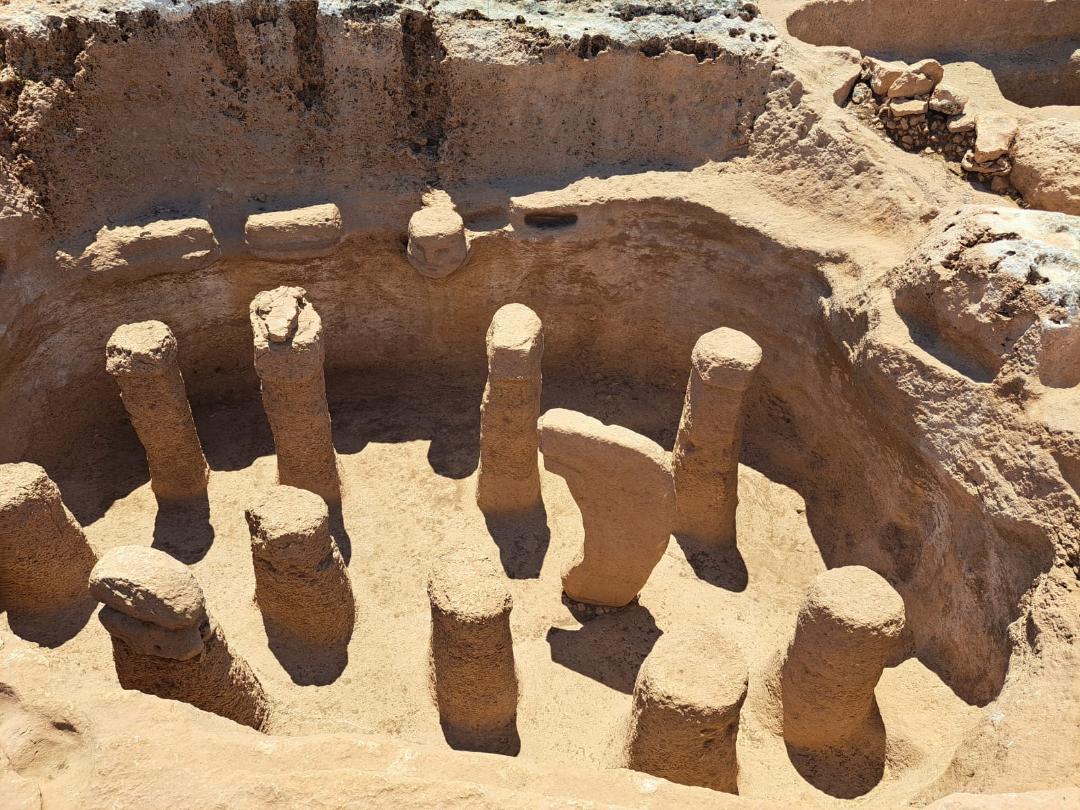 A Ceremonial Chamber or Prehistoric Pride Event? A cult room of stone phalluses has been discovered on a remote Turkish hillside. Karahantepe is an exciting new site an hour`s drive from Göbekli Tepe. It falls within the same cultural orbit as Göbekli Tepe at the northern arc of the Fertile Crescent about 10,000 BC, although it is slightly younger.

The site is located near Yağmurlu and roughly 46 kilometres east of Göbekli Tepe, which is often called its sister site. It is part of the Göbekli Tepe Culture and Karahan Tepe Excavations project. The area is known as “Keçilitepe” by local people. It is part of a region of similar sites now being uncovered known as the Taş Tepeler. Unlike the area around Göbekli Tepe and the city of Urfa which benefits from the GAP irrigation project on the Euphrates, the area around Karahan Tepe is arid, parched and hot most of the year.

While there are obvious connections with Göbekli Tepe and other sites now emerging in this region, there are some interesting differences in emphasis. While animals predominate at Göbekli Tepe (exclusively male where identification is possible), the imagery and symbology at Karahan Tepe is dominated by the phallus. The iconic T shaped pillars are also present here but imagery and statuary are human and male.

Göbekli Tepe was initially thought to stand alone as a destination for Neolithic, nomadic hunter gatherers. Now it is considered to be one site, albeit the most important site, in a constellation of settlements and ritual centres that includes sites like Nevali Cori and the centre of Urfa where the extraordinary Urfa Man was discovered. Settlement evidence at Göbekli Tepe is emerging but this appears to be secondary and a little later than the oldest Level III levels. Like Nevali Cori, at Karahan Tepe there seems to be an integrated environment where the domestic, symbolic and ritual are found together.

Karahan Tepe can genuinely be called a village, one of the earliest found, but certainly operating in a fertile local environment, dependent on hunting and gathering. This culture is clearly located in that lengthy transition phase between complete reliance on hunter gathering and the emergence of agriculture and the eventual reliance on plants and animals modified and specifically bred by humans as a resource. This was a process that took many hundreds of generations.

An interesting aspect of this has been the discovery of what are known as “desert kites” across this area. Desert kites are common across Syria, Iraq and the Negev as well as the Arabian Peninsula and Sinai and into Central Asia. They are arrangements of rock in the form of dry-stone walls in set patterns resembling, in many instances “kites” or key holes. They are common structures used for channelling animals into contained areas and are typical ways of hunting large numbers of herd animals and corralling them for the kill, but they also had later uses as a means to assist the management of domestic animals. In this context they are still used in the region today. They are, in effect, a transitional technology. Many large “kites” have been discovered in the areas of cult/domestic centres like Harbetsuvan Tepesi, Kurt Tepesi and Karahantepe.  Surveys from cliff sites in the vicinity of these kites have revealed widespread neolithic remains, including “T” shaped pillars.

So far, only 1% of Karahan Tepe has been excavated but what can be seen so far features circular rooms that were planned out in advance, and which demonstrate skilful processing of bedrock revealing an impressive level of prehistoric architecture and construction. Within the remains of the buildings, archaeologists found carvings of human heads, snakes and a fox, as well as several interestingly shaped pillars, statues and stone platters of amazing quality. Building multiple structures with different purposes and integrating them in such a manner is the reflection of a complicated belief system as well as a sophisticated sense of community. While we cannot talk about “religion” in its modern sense, we see a set of distinct, limited ritual spaces that are radically set out in a formal manner that pre imagines the processional and ritualistic practices of religions today……with some imagination.

If we take this “processing” of bedrock and the use of terrazzo flooring and plaster we observe at Göbekli Tepe, we are seeing the earliest evidence of what we would understand as industrial activity. This is an amazing development. At the end of a period of use it appears that these central cult buildings at least, were interred.

What we see now emerging from the arid hills around Karahan Tepe is a tight knit accumulation of domestic building tied into a large ritual space where T pillars stand in silent observation. Attached to the large communal ritual space, accessible through a crawl way, is a “lodge” for unknown rituals that clearly feature a veneration of masculinity indicated by eleven large phalluses cut from the bedrock and overseen by a stern, masculine face. Adjacent to this ritual “lodge” is a large cistern cut from the rock with water channels running off it. Additionally, there is a faint image of a snake carved along the rim using picked out dots in the rock.

Back in the amazing Archaeological Museum in Sanliurfa, there is a room displaying the statuary and other finds from Karahantepe that demonstrate the masculine imperative of the site`s activity as well as the virtuosity of artistic and carving skills possessed by the people who lived and worked there.

Watch this space! We will be revisiting this place many times in the years to come. Sally and Nick