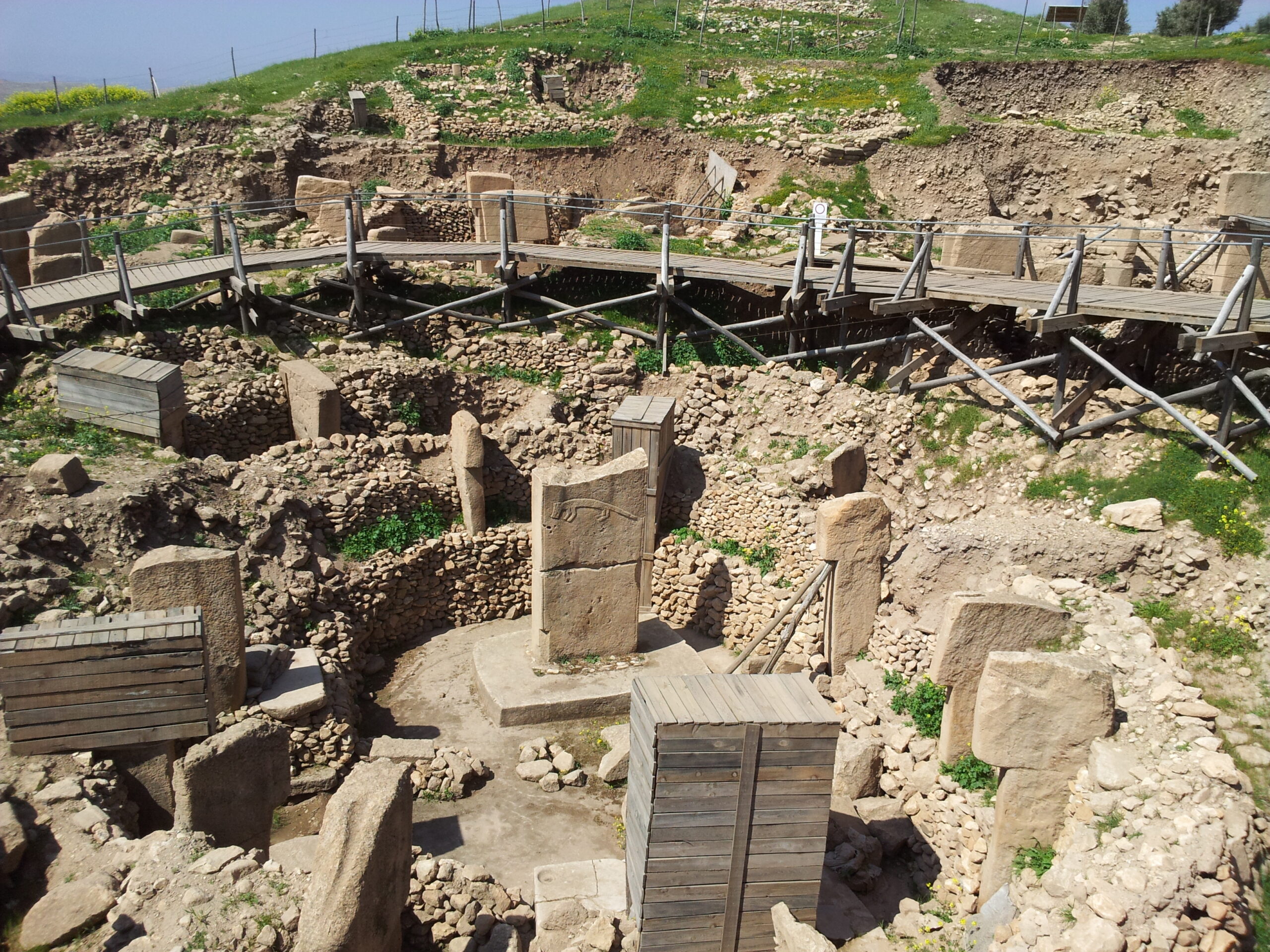 The Place That Rewrote History

In 1995 an excavation began which would lead to a ground-breaking discovery that would literally re-write history, you simply wouldn’t believe what has been unearthed.

About 18 years ago we first visited Göbekli Tepe when it was just starting to emerge from the ground after an invitation from Klaus Schmidt, the Lead Archaeologist in charge of the site. At that time there was no purpose built road to the site and we had to stop at a number of small hamlets to ask directions.

There was no roof, no fences, no visitor’s centre and you could walk pretty much anywhere you liked across the hill top and the surrounding area. We met up with the farmer who owned the land and who first set eyes on one emerging stone. His grandson took us around the main excavation site and he also walked us through the Göbekli Tepe quarry… The hairs on our arms were standing to attention, our eyes were on stalks, our breath taken way. Amazing.

The first impression we got approaching the site on foot was a bit like walking across corn flakes, because parts of the hill were covered with flint microliths and flint tool fragments and they crunched and crackled noisily as we walked over them. We were excited to be seeing this unique site and not knowing what we were really looking at, we decided, when we returned home, to take a course in flint knapping in the expectation that we would understand better what we had been looking at. Doing, after all, is the best way to learn. We found Will Lord who was without doubt one of the foremost exponents of this lost art.

This is where our friendship with Will Lord began, in his back garden, with lots of fire, lots of flint and lots of fun. Will leaves his imprint on every person he encounters and every task he tackles leaves a memory for those who are lucky enough to spend time learning from him. He has a heart of gold, a cheeky sense of humour and an open spirit to all people, a rare thing these days. We are fortunate to have come to know him and to spend time learning from him, expanding our knowledge and our friendship.

Over the years we have had many conversations with Will about flint knapping and bronze casting but also about the stone carving that we do here in Dorset and where we have created our own Portland Stone pieces modelled on the work at Göbekli Tepe and other areas of Turkey. The best way to get your head around something is to have a go.

We always wondered what insights Will would bring to a Stone Age site like this and in July this year, we found out. He was amazing. We walked the site and with his expert eye he described techniques, reasons for stones to look like they do and how and why stones were carved and moved from the surrounding areas. One of the problems with Göbekli Tepe is that, at first sight, it is a real jumble; it looks unbelievably complicated. As a result many people believe that it was constructed as one “complex”. What you have to remember is that while this site is being excavated and is coming out of the ground over a couple of decades, it was in fact constructed and used over a period of between 1500 and 2000 years, before it was finally abandoned and buried. It takes a very sharp eye to untangle this and Will Lord has that eye.

The point about Göbekli Tepe is that while it is undeniably Stone Age the artistic and construction work at the site is extraordinary.

In the on-site museum, Will looked at exhibits of flint knapping and spoke about the complexity of creating such items and funnily enough, in Şanliurfa Archaeology Museum he even pointed out that a mannequin was holding the flint hammer incorrectly. The time with Will passed with fascinating conversations about the Stone Age, laughs about anything that tickled us, sharing really tasty food, learning from each other and exploring our friendship further.

Will has organised and run fantastic Prehistoric survival, carving and flint knapping courses for years and these are skills we see on display at Göbekli Tepe, but writ large! Will was able to look at the objects, both in situ and in the museum, and tapping into a lifetime of experience, instantly describe the process. This kind of interaction brings the whole experience of Göbekli Tepe, and it is an experience, instantly to life. Visiting these places with Will Lord was amazing and it brought texture and life to ancient archaeological sites. We can think of no better way to explore Prehistoric Sites than with a Prehistoric Man.

Especially interesting was our visit to the newly excavated site at Karahan Tepe, an hour’s drive away, with its startling ceremonial plaza with T Pillars and it’s arresting cult lodge of giant phalluses carved from the bedrock. This all comes from a different time, unimaginably distant but instantly human. Like us but not like us. Visiting with a fresh outlook guided by someone who understands the technical issues involved was an awesome experience.

What is emerging in this south eastern part of Turkey in Şanliurfa Province is a constellation of Prehistoric sites, now broadly identified as Taş Tepeler, which means “Stone Hills”. This is the area that is the cradle of man’s development of agriculture and the emergence of settled life. It all starts here…

Fitting that technical understanding together with free ranging discussions about the cultural aspects of what we were seeing…. aided by a beer or two in the cool of a fan spraying a fine water mist in the evening…. was an enriching use of our spare time.

While all these experiences were phenomenal, it was difficult to identify a high point, but if I were pushed, it would be seeing Will Lord making the acquaintance of Urfa Man, the oldest life-sized statue of a human being, about 9500 years old, discovered in the centre of the ancient city of Şanliurfa, just a couple of hundred metres away from where he now stands, and unashamedly male! It was like watching a communion of two men separated by 10 millennia without the need for a word to be uttered.

From Şanliurfa, we travelled east stopping overnight to visit the Mausoleum of Antiochus on the peak of Mt. Nemrut in Adiyaman. This astonishing monument of giant stone statues over 2000 metres up on the mountain top was lost for two millennia. While it isn’t “Stone Age” you can`t come this close and not go. Passing along the Silk Road and across the river Euphrates we stopped at Diyarbakir on the River Tigris and another ancient city, before arriving at Nemrut Crater, a complete Caldera with hot and cold lakes on the western extremity of Lake Van in eastern Turkey.

From Nemrut in Adiyaman we had crossed the northern part of Mesopotamia – “The Land Between the Rivers” – to arrive at the other Mount Nemrut on the western shores of Lake Van. Yes, just to confuse you, Turkey has two Mount Nemruts and we did them both on this trip!

You can visit Mount Nemrut in this 12 day tour

We spent two days camping in Nemrut Crater prospecting for obsidian to knap. Our excellent driver Ömer made sure we were well stocked with delicious, freshly barbecued food and of course, lots of water to drink to keep hydrated.

Local families visited the crater during our time there because it was a national holiday and they were not only fascinated by the beautiful sites and sights that we were enjoying, but also with us and Will…. Many photos were taken, lots of lovely conversations occurred, cups of tea were drunk, contacts exchanged and food shared. The lovely Turkish and Kurdish people once again welcomed us to their country. One of the overwhelming experiences anyone visiting this part of the world will have is the hospitality and curiosity people have for those who visit.

Camping was interesting, as bears frequent the crater and while we didn`t see them, we did hear them in the night. We did however, meet the daytime residents…

We swam in the hot lake and paddled in the cold lake and we trekked up around the volcano’s edge to see the spectacular views and investigate the obsidian outcrops.

Thank you for reading this far, we have loved having you with us and make it our mission to provide you with entertaining travel blog posts all about our knowledge of Turkey. If you have enjoyed reading this post, please share it with a friend or to your social media page.

We have many more great travel blogs for you toread here and would love to see you with us on a tour soon.

Thanks again, Sally and Nick.