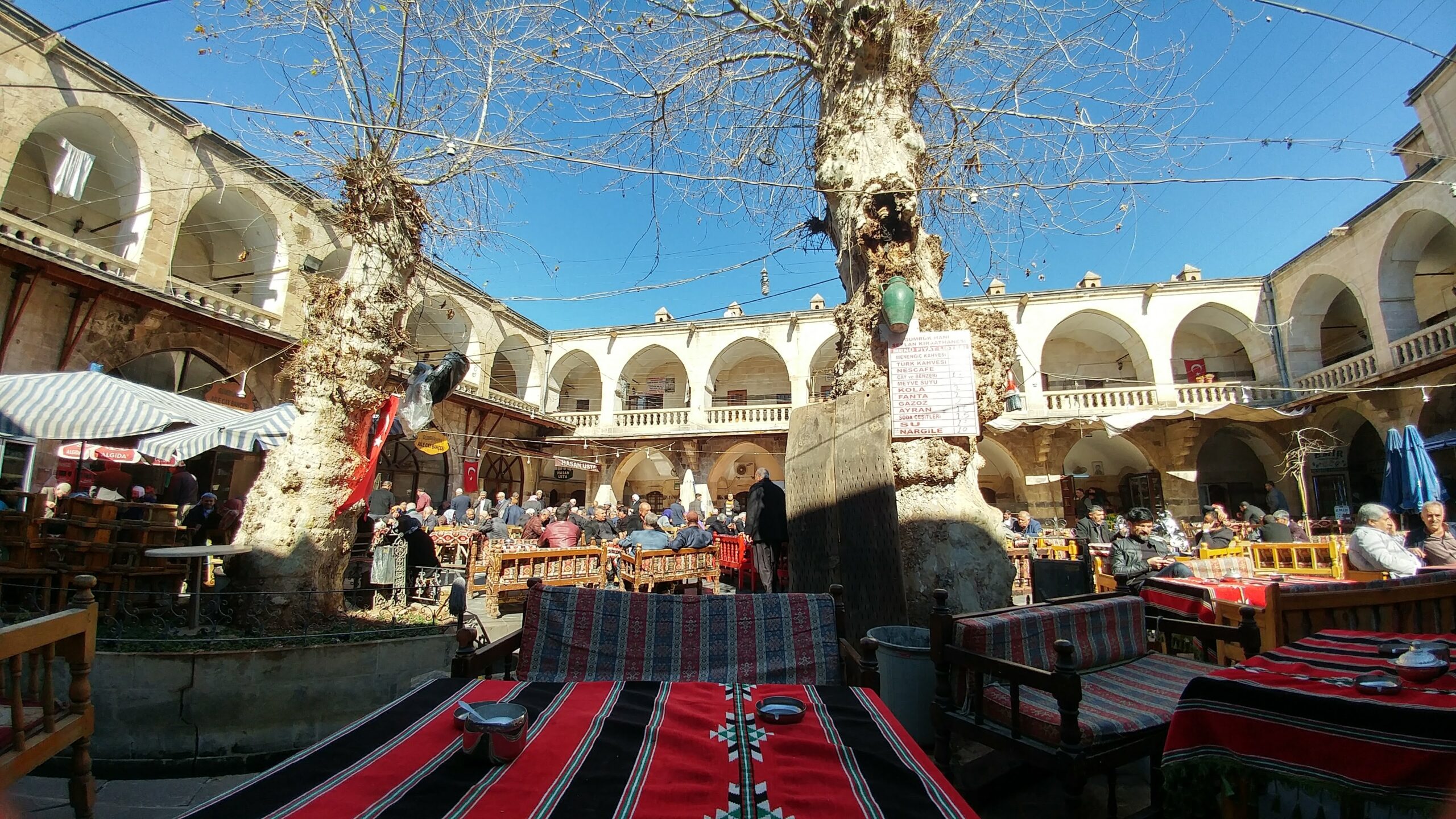 An Ancient Turkish secret to make you happy

There’s an old Turkish saying “When God wants to make a poor man happy. He causes him to lose his donkey, then find it again”, or in Turkish “Tanrı bir fakirimutlu ekmek istediğinde, eşeğini kaybettirir, sonra tekrar buldurur“.

Take a moment to ponder that saying’s deep truth next time you misplace a set of keys and the joy you experience when finding them or, when in Urfa, while you relax and sip a cup of delicious Turkish coffee in the Gümrük Han, because you stumbled into the place when you got lost in the maze of alleys and narrow streets of the bazaar.

It’s the bazaar that gives a truly vibrant, polyglot experience of Urfa where one can hear a jumble of Turkish, Arabic and Kurdish in an environment that seems to have come right out of the 16th century which, of course, it has. The bazaars and Hans in both the Seljuk and Ottoman periods were usually established and protected as a part of a Charitable Foundation, or “Vakif.” In Urfa’s central bazaar district there are, in fact, two adjoining bazaars. One built in 1562 by the order of Sultan Suleiman the Magnificent, and extended in 1740. The second bazaar is the Huseyniye Bazaar, used as a Copper Market, built in 1887.

Both bazaars are thriving, bustling market places, cafes and snack bars with adjoining work shops serving the working class people of Urfa with everything from pots and pans and suits of clothes to tasty comestibles and gold and silver jewellery for weddings and births. Need a cauldron? Then the Kazan (cauldron) Çarsışı in the metal workers’ district is the place for you. A new chair? Then it’s the Oşısı (Chairmakers’ market) you want. Do you need a backpack mended or a pair of trousers let out? Then take yourself off to the Kavafhane Çarşısı where the tailors and shoemakers can be found hunched over antique mechanical contrivances and old sewing machines, busily stitching and sewing clothes and accessories for the people of Urfa.

The Gümrük Han sits between the two bazaars connecting them like a hinge and while, at first glance, it all looks chaotic, very quickly one begins to discern the order and the logic of the place, not only in terms of modern commerce but also in terms of the ancient patterns of trades and workers’ guilds,  each of which had a defined and protected space within the bazaar. It is a place one can easily get lost in but the wrong way is always right way, always interesting and you will find yourself soon enough.

Through this Han flows the water source that was the Karakoyun, once the main water course through Urfa since Neolithic times; it now travels underground through the Bazaar and is the same water source that feeds the nearby Mevlid-i Halil Dervish Lodge, Mosque and Cave complex, as well as the Pools of Abraham today and is the reason for the city’s existence in this place.

When the month of Ramazan falls during the hot summer, and when the Han is a much quieter place,  the local boys descend on the courtyard where they have riotously good times diving and swimming in the water course and through the arched channels at the courtyard centre.

The older 16th century Bazaars feeding off the Han are broken into sections describing either their location in relation the the Han or the particular group that they served. So, we have the Han Önü Bazaar (the one in front of the Han), the Sipahi Bazaar (Siphahis were mounted levies serving in the Ottoman military), the Boyahane Çarşısı (the dyehouse), the Pamukcu Bazaar (cotton makers) and so on. The Gümrük Han, then called the Yetmiş Han, was also mentioned by Evliya  Çelebi, the famed Ottoman traveller and diarist, in his 1650 travelogue.

In Ottoman times the Han was usually at the centre of the bazaar and commercial district of a city and it was here that the most precious items such as silk were traded. In fact, the bazaars were, and still are, a constant feature of travelogues, and their 21st century equivalents, the Travel Journal or Blog, written by visitors to Turkey, and the bazaars of Urfa are amongst the best in the land; they still retain an ancient flavour and an exotic ambience now lost from bigger markets and bazaars in places like Istanbul with its massive Covered Bazaar. Not only were the bazaars and hans places to shop and do business but they were places to stop…….. and pass the time of day with friends over a glass of tea or coffee and a game of Tavla. In Urfa, City of Prophets, this is still true.

In fact, there`s a unique Turkish word for a momentary pleasure or an enjoyable escape and suspension of time in pleasure;  “keyif,” but that`s another story.

We really hope that our travel journal has whet your appetite and to inspire you further please take the time to read our fabulous 12-day Tour of Eastern Turkey brochure: